DARREN TOTH, Director of ToThink Engineering reports on the importance of having efficient screens.

Most vibrating screens and feeders in service are likely to be costing you in lost income or through excessive downtime and repairs. For many screens, both apply. This is a big statement, isn’t it? Let me explain.

Over the past decade (with a previous employer and, more recently, through my own business) I have tested hundreds of vibrating machines (of various makes and models). Of these machines, upward of 75% were either not screening at their full capacity or they displayed very inconsistent and potentially damaging motion. For some, it was both. I have no reason to think that the thousands of machines I haven’t yet tested are any different, hence my BIG statement.

In a perfect world, a vibrating machine would have the exact same shape and amplitude-of-motion on its’ left side as its’ right and zero displacement transversely (left-to-right). However, a well built, well set-up and a reliable screen would only come close to this ideal but, in practical terms, close is enough. Regardless of age, these machines can be configured and adjusted to run at the appropriate speed and throw for their application and within limits that would ensure a respectable service life. The cost of doing so is considerably less than the cost of decreased productivity and excessive maintenance. From a reliability and service life perspective, fine tuning a screen to produce relatively consistent motion between its’ left and right sides in addition to minimal transverse vibration is crucial. Here’s why.

Significant variations in the throw of a screen, from one side to the other, and excessive transverse vibration indicate flexing (stressing) of its’ major structural components, resulting in premature failure. In terms of fatigue life, a 50% increase in stress on a mild steel component, subject to cyclic loading, will reduce its’ life fivefold. This often is the reason why some screens fail within months of operation (very rare but it can happen) and others run issue-free for many years. 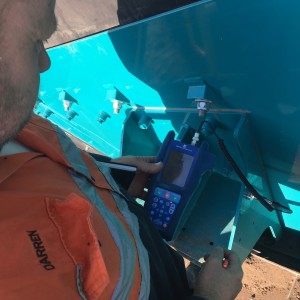 To perform efficiently and reliably, vibrating screens and feeders must be expertly designed and carefully built (including a balanced and aligned mechanism). The machine’s mass, including feed material, needs to be similar on one side of the machine as the other. The machine’s box, or frame, should have no natural (critical) frequencies close to its’ operating speed and it is vital that support springs have similar static compression between the left and right sides of the unit. The springs should have equal stiffness and none of them are to be broken or sagged. The equipment also needs to run with a motion and speed and that is appropriate for the feed material, deck angle and type of media. It may sound a little daunting but all this is certainly achievable.

All new screens should be thoroughly tested, when they are about to go into service, by someone with expertise in vibrating equipment using an appropriate vibration meter. Unfortunately, not all new screens are checked (to this extent) when put into service. This commissioning check is in addition to any factory testing carried out by the manufacturer. I also recommend that screens are checked once or twice per year and further checks should be performed when major repairs are carried out or changes are made. These changes can include speed or counterweight adjustments, media conversions (steel mesh to rubber/poly for example), support spring replacement etc. Slight changes can cause significant shifts in machine dynamics causing potentially damaging vibration which, if undetected, can result in significant damage.

My business offers a range of products and services to the aggregate, sand and recycling industries and is not focused solely on vibrating equipment. However, it is with vibrating equipment that I see a great need and where, I believe, opportunities exist for increased productivity and reliability. That is, money to be made and money to be saved.

If your screens are a problem or you think they could be running better, get them checked out.

Opinions and emphasis placed on vibrating screens varies from person to person and from site to site. However, given they are the last machines to process material, their importance is clear. What is not clear is how to get a screen running well and keeping it that way. Darren Toth reports.

The focus of this article is the aspects of vibrational behaviour that affect the life of a screen, rather than the motion relating to its application. It should also be noted that where most screens appear to run poorly, there are a small number of sites where all screens run well.

Figure 1. Counterweight plates oxy-cut by hand are quite inconsistent.

The sites where these observations have been made are mainly (but not limited to) quarries in the eastern states of Australia.

Given the cyclical nature of vibrating screens, their components experience fatigue. This is unavoidable and so their service life is finite. As the screen box is rapidly pulled through its motion (circular, linear, oval/elliptical), stresses are generated simply due to the acceleration of its components.

Add feed material to the decks and stress levels increase. It is fair to expect that the designer of each piece of equipment has allowed for this, and if these stress levels are not exceeded the screen is likely to be reliable and long-lasting.

So why do some screens run for many years and simply wear out, yet others can show signs of structural failure within months of being put into service?

It’s because, in the screens that fail prematurely, additional stresses are caused by internal flexing within the screen box. The flexing is caused by the screen vibrating differently on one side compared with the other.

When these additional stresses are combined with those that are typical and unavoidable, peak fatigue stresses within the screen box are significantly higher. This internal flexing will drastically shorten the life of the screen.

As a rule of thumb, a 50 percent increase in fatigue stress levels will decrease a component’s life by five times.

Poor motion – the difference in vibration from one side to the other – can be caused by any of the following:

Figure 2. A significant variation in feed material across the deck.

There are many ways (modes) that a screen box can vibrate internally, but there are two main modes where the natural frequencies are often close to typical screen operating speeds. One of these modes is a torsional (twisting) vibration through the length of the screen and the other is a racking type of motion (see Figure 5).

If screen resonance is not detected and rectified, it will result in structural failure of the screen box, usually in the deck frames. In extreme cases, the variation in motion, around the screen, can be seen from a distance. In such cases, feed material behaviour becomes quite erratic, with differing bed depths from one side to the other.

For example, a customer significantly changed the mesh sizes on a screen and it started behaving erratically. Their description of the issue was that the screen was very lively in two diagonally opposite corners and “dead” in the other two. It sounded a lot like resonance and some testing on site confirmed that to be the case. By changing from lighter meshes to heavy ones, the customer unknowingly changed the natural frequency of the screen to something very close to running speed. Following an analysis of the natural frequencies and the screening application, the speed of the screen was reduced and the erratic behaviour ceased.

Figure 6 shows the results from testing over separate site visits. The middle set of data shows the stark difference in a vertical motion (Y) between the left and right sides of the screen. The third set of data shows improved motion after speed change.

New screens should be properly commissioned and running well. If you are not confident your equipment supplier will do this for you, get someone independent to test your screen. If it is running badly from the start it will cost in repairs and downtime.

Frequently measure and record static laden spring heights (ie when the screens aren’t running). Make sure the spring heights are within the manufacturer’s guidelines. If these are not available, consider adding packers if the difference is more than 5mm and then aim to get the spring heights within 3mm from one side to the other.

Remember, you shim the taller springs to take the load off the ones that are compressed more. Don’t be concerned if the feed end springs are different heights from those at the discharge end. It is left to right that is important.

Figure 5. Torsional vibration (left) vs racking motion through the length of the screen.

If spring heights have changed significantly from one check to the next, investigate why. If you replace a spring with a new one, also replace its equivalent on the opposite side.

Periodically check the motion of the screens by holding a piece of paper up against the side of the screen and plotting the motion by intermittently pushing the pen onto the paper. It takes a little bit of practice, but it is cheap and simple. If the motion looks different from one side to the other (as it does in Figure 7), there is an issue and it needs to be corrected.

If any changes are made to a screen (ie a meaningful change in size/weight/style of screening media or speed increase/decrease, etc) have someone test it to make sure it is still running acceptably.

If a counterweight adjustment is required, ensure these changes are carried out with precision. Small inaccuracies in counterweight mass and/or alignment will negatively impact the screen.

Get your screens checked at least once a year (but more frequently is beneficial) by someone with a vibration meter who can tell you how your screens are operating and advise on how to get them running better.